Market analyst firm Canalys has published its preliminary report on the global smartphone market. According to the latest data, Samsung maintains its number one position in the second quarter of 2021 as well. However, the most interesting part in this report is that the Chinese brand Xiaomi has surpassed Apple to become the second largest smartphone manufacturer in the world.

The smartphone market shows a recovery trend with 12 percent growth in the second quarter of 2021. Samsung maintains its title of dominating the leadership seat with its 19 percent market share. Xiaomi, on the other hand, achieves a 17% market share with a growth of 83%. Thus, leaving behind Apple’s 14 percent market share, Xiaomi has also taken over the title of being the second largest smartphone manufacturer in the world. Oppo and Vivo, the manufacturers established within BBK Electronic, occupy the fourth and fifth places in the list. The market share of both companies is 10 percent. When we consider Apple, Oppo and Vivo as a single company, it falls behind BBK Electronic and regressed to fourth place. 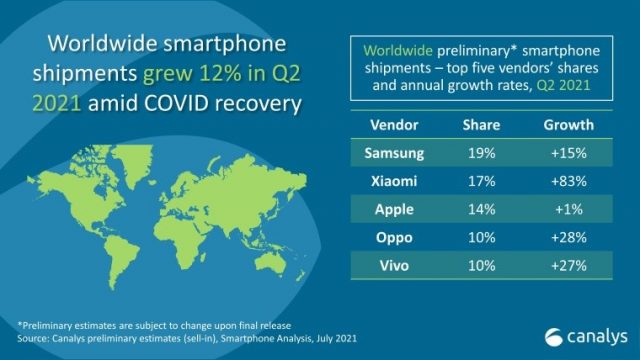 At this point, it is worth noting that Xiaomi’s current smartphone inventory is mostly smartphones related to the budget-friendly segment. So much so that Xiaomi’s average selling price is around 75 percent cheaper compared to Apple. The Chinese brand will also continue to produce premium segment smartphones such as the Mi 11 Ultra to increase its revenue. The report also shows that Xiaomi generated the biggest sales growth from Latin America, Africa and Western Europe. In this context, it is also possible to attribute Xiaomi’s rapid growth to the situation of HUAWEI, which was heavily affected by US sanctions.

Windows 11 gets the classic start menu with a little trick!

The S Pen Support Spoken That Galaxy Z Fold 3 Will Have Has Been Certain!