In early June, the MSC Orchestra, a 2,500-passenger cruise ship, entered the Venetian Lagoon at dawn, sailing through St. Mark’s Basin, past the Doge’s Palace and the still-quiet St. Mark’s Square. It continued its journey through the Giudecca Canal and then docked on Venice’s main island.

It was the first time a cruise ship had entered the lagoon since the pandemic hit Italy in February 2020.

In a place that is heavily dependent on tourism, and where cruise travel contributes about 3 percent of the local gross domestic product, many in Venice welcomed the ship.

But others did not. Among the latter were 2,000 protesters who met the MSC Orchestra when it sailed on its reverse route two days later. Some were on small boats on the Giudecca Canal; others chanted anti-cruise slogans from the waterfront. 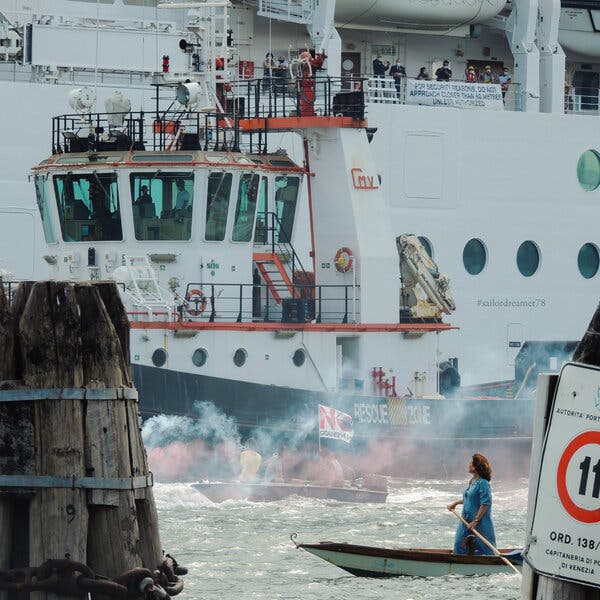 Protestors in small boats met the MSC Orchestra as it departed Venice in June.Credit…Michele Gallucci

“I hope we made some of the passengers wonder if what they were doing is wrong and think about the social and environmental impact of their vacation,” said Jane da Mosto, a biologist and activist who took part in the protest on a small boat.

The pandemic has put Venice’s legendary international tourism influx on hold for more than a year. In doing so, it has sparked an animated debate on how mass tourism has negatively affected both the lagoon’s environment and Venice’s character. In this debate, cruise ships have become a metonym for overtourism.

The pandemic hiatus has given the city — which is celebrating its 1,600th birthday this year — a chance to reflect on how tourism’s exponential growth has eroded its social fabric, driving non-touristy businesses and residents out. In the past four decades the city’s historical center (what most Americans mean when they say “Venice”) has lost half of its residents, now down to 50,000.

“The situation is dramatic, there are no houses,” said Maria Fiano, 46, a high school teacher who runs OCIO, an organization that monitors Venice’s housing. According to her estimates, 42 percent of beds in the center are rented to tourists, which landlords find more profitable, leaving many locals struggling to find a place.

In March, the local government of Veneto, Venice’s region, approved a plan vowing to curb hit-and-run visitors and attract more slow-paced ones. They also hope to wean Venice off its over-dependency on tourism, creating new places of employment, including a hydrogen plant, a project still in its embryonic phase, and a recently launched accelerator for renewable energy businesses. “It’s the first time that local authorities formally recognized that mass tourism cannot go on like this forever and that depopulation is a serious sorun,” said Fabio Moretti, the dean of Venice’s Academy of Fine Arts, which was involved in the plan along with other academic institutions and the Boston Consulting Group.

Venice residents hold a protest to demand an end to cruise ships passing near the city, as the first cruise ship of the summer season departs.Credit…Manuel Silvestri/Reuters

‘An act of violence against the city’

The presence of large ships in the lagoon, especially those in the immediate vicinity of Venice’s most precious sites, has raised eyebrows at UNESCO and sparked protests by residents since 2012. They argue that mammoth, fuel-guzzling ships are physically incompatible both with Venice, a two-square-mile island, and the lagoon that surrounds it. (A 2019 study published in Nature asserted that the wakes created by large vessels induced the erosion of the shoreline and, through the “continuous resuspension of sediment in the area,” could redistribute industrial pollutants already present in the lagoon.)

It’s not so much the number of visitors they bring overall — only 7 percent of the 27 million tourists who visited Venice in 2019 were cruise passengers, according to a recent study by the Boston Consulting Group — but the fact that they bring thousands of them all at evvel, overcrowding the city’s historical center while contributing little to its economy.

On average each cruise passenger injects about 200 euros into Venice’s economy, according to the same study, but most of that money goes to port taxes and other services, such as laundry and refueling, rather than city-center businesses like restaurants and museums.

“I’ve never interacted much with cruise tourists, they are rarely seen in places like mine,” said Andrea Degnato, 37, who manages a wine bar called Cantina Arnaldi.

Indeed, because they are often in too much of a hurry to linger in a wine bar, cruise visitors are seen as the opposite of the kind of tourists who would make Venice tourism more sustainable.

“People are unloaded here as a sack of potatoes, they hang around, thousands of them, just a couple of hours, buy a slice of pizza and go back,” said Silvia Jop, 37, a Venetian who works in cinema and cultural events. “If you add this to environmental damages, it’s an act of violence against the city.”

But she also acknowledges that cruises provide work to thousands of people, such as cleaners and porters, although most of them tend to be from the nearby mainland. “Their right to have a source of employment must be respected,” Ms. Jop said.

After a long pause in mass international travel, Venetians are contemplating how to welcome visitors back.Credit…Luca Bruno/Associated Press

For centuries, the Venetian Lagoon protected Venice. Built on a cluster of islands, the city could not be attacked from land, and the lagoon’s hard-to-navigate shallow waters and muddy seabed discouraged invaders from sea, who risked getting stranded. Thanks to this inaccessibility, Venice maintained its status as a maritime power throughout most of the Middle Ages.

But today Venice can be reached on cruise ships weighing up to 95,000 tons, docking directly in the heart of the old city.

“It’s like having an elephant in a china store,” said Diego Calaon, a scholar of ancient topography at Venice’s Ca’ Foscari University. He noted that, in its heyday in the late Middle Ages, Venice had a policy of preventing large vessels from docking on its shores, noting that they were much, much smaller than çağdaş cruise ships.

Stretching 30 miles across the Adriatic and shielded from the open sea by two narrow islands, the lagoon is a shallow body of salt water, often less than 5 feet deep, crisscrossed by deeper trenches created by erosion or dug by man. It is only through these canals that vessels of a considerable size can navigate — and, even so, with difficulty: In 2019 a cargo ship was stranded in the eastern part of the lagoon, near Chioggia.

Venice’s historical center, a fish-shaped island in the middle of the lagoon, is skirted by one of its deepest canals, the Canale della Giudecca, where cruise ships currently pass, docking in the island’s main port, the Marittima. But this route is narrow, and dangerously close to the city. In another incident in 2019, a cruise ship lost control and crashed into a dock, injuring at least four people.

“We see only two solutions. Either these huge ships are kept out of the lagoon altogether, or the industry adapts to our environment and sends smaller ships,” said Tommaso Cacciari, a spokesman for the No Big Ships Committee, a grass-roots organization that since 2012 has been fighting the presence of cruise ships in the lagoon.

A new home for ‘the monster’?

On paper, cruise ships are already banned from Venice, if not from the lagoon entirely. In 2012 Italy’s Parliament approved a bill that banned ships over 40,000 tons from parts of the lagoon close to Venice’s main island. But the same law also says that the ban will be applicable only after a viable alternative route is found. Almost a decade later, authorities still haven’t found that alternative.

“We are kept in a limbo,” said Francesco Galietti, the national director for Italy of the Cruise Lines International Association. He added that as soon as the Italian government finds a solution, the industry is ready to comply with whichever alternative route is chosen. “Any solution that makes sense would work for us. The only thing we deva about is keeping Venice as a home port for the Eastern Mediterranean.”

But anti-cruise activists argue that it’s unfair that the current law is conditional on finding a new port: “It’s like having a monster knocking on your door and, rather than chasing him away, you worry about finding a new home for the monster before forcing him to leave,” said Ms. da Mosto, the activist.

There are two main proposals: rerouting vessels toward Marghera, the lagoon’s main commercial port on the mainland, or building a port outside of the lagoon.

The sorun with Marghera, said a representative of Venice’s Port Authority, is that “it’s a commercial port for containers, it’s not built for passengers.” Also, since Marghera is inside the lagoon, critics say that rerouting cruise ships there will do little to contain environmental damages.

As for building another port altogether: On April 1, Italy’s government approved the allocation of funds for a feasibility study for such a project. But the process of developing the plans for the project alone is expected to last until mid 2022, the Port Authority said, leaving little hope that a new port would provide a solution in the short or even medium term.

Halting cruise traffic until a new port is ready would take an economic toll. Before the pandemic, the cruise industry employed, directly and indirectly, 4,200 people in the area, according to the Port Authority, and brought revenues of 280 million euro (over $332 million), although most of that money does not go to Venice’s historical center.

In the meantime, UNESCO is getting impatient. Last month the agency released a report urging Italy’s government to prioritize “the option of banning large ships from the Lagoon altogether” and to set a time frame to “temporarily reroute ships” toward Marghera or elsewhere.

The agency also announced on the same day that it is considering adding Venice to its list of endangered World Heritage sites. “The recommendations for inscription on the UNESCO List of World Heritage in Danger are not sanctions but alerts to find solutions,” a representative for the agency said in an email statement, mentioning “mass tourism, especially with the presence of cruise ships” as one of the organization’s concerns.

But several government officials, speaking anonymously because Italy’s factitious coalition government is divided on the topic, said they’re feeling pressured by UNESCO and, more broadly, by the negative publicity Venice received when cruise ships returned after the pandemic. Recent protests have brought the attention of the international media on the issue, and Venice is hosting a G20 summit between July 8 and 11.

The summit will provide an opportunity for a hiatus. Authorities have issued a temporary halt on large cruise ships until at least July 18, citing a combination of security measures ahead of the summit and the upcoming Festa del Redentore, the annual şenlik celebrating the end of the plague that devastated the island in 1576.

Sources in the Italian government say progressives in the coalition are trying to push an extension on the temporary halt until the Marghera port is at least partially ready and hope the international attention brought by UNESCO’s rebuke and by the upcoming summit will help them put pressure on the issue. “We’re feeling the eyes of the world pointed at us,” said one official.

Ermenegildo Zegna in a Deal to Go Public