In February, concerns that the Fed will begin to tighten monetary policy sooner than expected in reaction to the US post-election fiscal stimulus and vaccination campaign caused a general weakness in emerging market (EM) assets. Many investors were alarmed that the asset class was a repeat of the 2013 ‘Taper Tantrum’ that led to the sale of EM bonds and currencies.

These fluctuations have led us to create a scorecard to measure vulnerability to the potential new taper tantrum period for countries in emerging and border markets.

At that time, we thought that the small current account deficits and large non-residents’ government debt reduced the vulnerability of systemic EM. Yet we have seen the most vulnerable countries shift from the original ‘fragile five’ of Brazil, India, Indonesia, South Africa and Turkey to the new ‘fragile frontier countries: Jamaica, Tunisia, Ecuador, Sri Lanka, Belarus, Ethiopia, Laos, Bahrain and Oman.

In the months that followed, exchange rates stabilized to a large extent in the US. After rising from a low of 0.5% last August to 1.75% in March, the 10y U.S. Treasury (UST) yield settled at 1.5%. However, the Core PCE (the Fed’s preferred measure of inflation) fell from 1.4% in February to 3.4% in May (the highest since December 1991 and above the Fed’s 2% average target). Inflation surprises seem to have brought a hawkish shift in the Fed, with the CPI rising from 1.7% to 5% in the same period (the highest since July 2008 and above the 4.7% Bloomberg survey expectation). .

While the Fed considers the rise to be discontinuous and the rise in inflation is largely due to base effects from the post-Covid slowdown, markets are increasingly skeptical as markets will have to cut back on US$120 billion monthly asset purchases and/or raise interest rates earlier than expected if inflation proves to be stickier than expected is more worried. This complicated the situation when, at the FOMC meeting on June 15-16, the number of committee members expecting a rate hike in 2022 rose from four in March to seven, and the expectation of a zero rate hike by the end of 2023 turned into two rate hikes by the end of the previous meeting. Markets expect a clearer policy signal to emerge at the Fed’s Jackson Hole symposium in late August.

Its impact on the dollar was harsh, with the DXY index rising 2.4% from June 10 (when CPI information will be released) to June 18. The impact reflected on EM currencies was also a 2.85% drop. Since the beginning of the year, the dollar index has increased by 1.7%, while the JP Morgan EM Currency Index decreased by 0.85%. 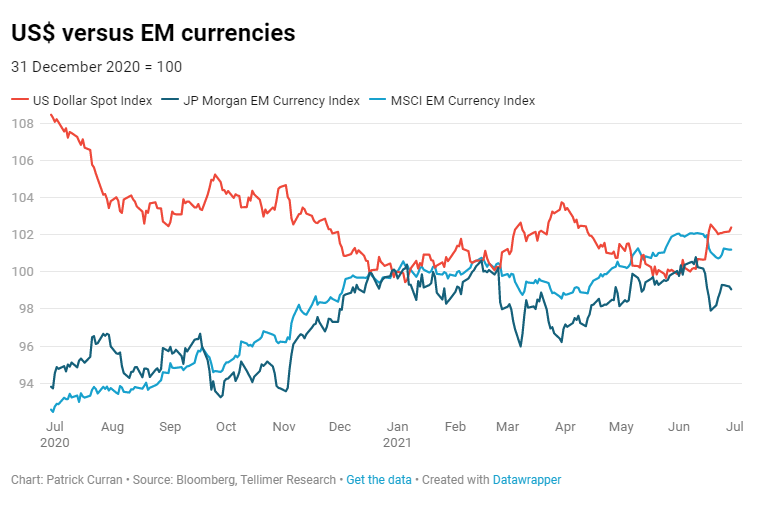 Its impact on bond yields remained unremarkable. 10-year U.S. bonds have consistently declined from the nearly 1.75% peak in March and fell below 1.40%. In addition to pricing the possibility of more interest rate hikes in the near term, the fact that inflation expectations are intact in the long term causes the yield curve to flatten to some extent.

At the same time, EM bonds remained stable. JP Morgan EMBI spreads have risen by just 5bps since June 10. Despite some slight currency weakness, EM assets seemed to have weathered the fresh wave of taper tantrum rushes without much impact. 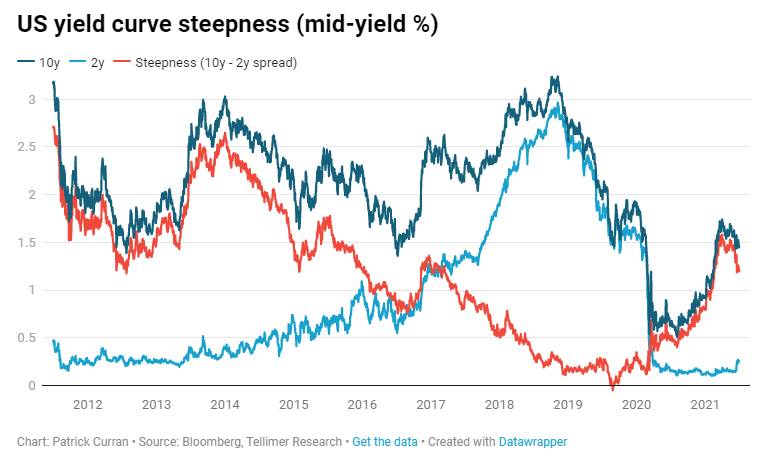 The limited supply created by the US Treasury pulling down large cash balances in 2Q after heavy issuance in 2020 is the most valuable reason for US bond yields to stay flat. Taking into account the Fed’s monthly purchases of $80 billion, net exports were negative $145 billion in mid-April-May, bringing this year’s total net issuance to just $15 billion. However, issuances will likely have to be increased in the 2nd half due to lower cash balances, again putting upward pressure on yields.

Given the potential for renewed upside pressure on US interest rates, what higher rates could mean for EM currencies and bonds; Argentina, Belarus, Dominican Republic, Jamaica, Laos, Mongolia, Sri Lanka, Tunisia and Turkey are the most vulnerable countries in our study to understand which countries are most vulnerable.

Tags
Bond Dollar On USA Why

FÖŞ told:  Every Mortal Will Suffer from Global Warming

4 Analysts: Expect These Levels Next Week For Gold Prices!

Russian banking sector made a profit of 1.2 trillion rubles in the first 6 months