Bill Gates and Melinda French Gates have at times referred to the foundation they established together as their “fourth child.” If over the next two years they can’t find a way to work together following their planned divorce, Mr. Gates will get full custody.

That was one of the most important takeaways from a series of announcements about the future of the world’s largest charitable foundation made on Wednesday by its chief executive, Mark Suzman, overshadowing an injection of an additional $15 billion in resources that will be added to the $50 billion previously amassed in its endowment over two decades.

“They have agreed that if after two years either one of them decides that they cannot continue to work together, Melinda will resign as co-chair and trustee,” Mr. Suzman said in a message to foundation employees Wednesday. If that happens, he added, Ms. French Gates “would receive personal resources from Bill for her philanthropic work” separate from the foundation’s endowment.

The money at stake underscores the strange mix of public significance — in küresel health, poverty reduction and gender equality among other important areas — and private affairs that attends any move made by the first couple of philanthropy, even after the announcement of their split. The foundation plans to add additional trustees outside their close circle, a step toward better governance that philanthropy experts had urged for years.

When they announced their divorce in May, Mr. Gates and Ms. French Gates noted the importance of the work done by the foundation they had built together and said they “continue to share a belief in that mission.” In the announcement Wednesday, each echoed those sentiments. “These new resources and the evolution of the foundation’s governance will sustain this ambitious mission and vital work for years to come,” Mr. Gates said in a statement.

In the immediate aftermath of the divorce announcement, it was unclear how they would share control of the institution. Wednesday’s announcement indicated that if they cannot work out their differences, it is the Microsoft co-founder Mr. Gates who will maintain control, as he essentially buys his ex-wife out of the foundation.

Mr. Suzman said he did not know how much she would get if it came to that. But any payout would likely be significant.

Public records show that billions of dollars’ worth of stock have already been transferred into Ms. French Gates’s name since the divorce was announced. She pursues her own priorities through a separate organization known as Pivotal Ventures. Mr. Gates also has his own group, Gates Ventures.

Less than a year ago, the Gates Foundation was run by Mr. Gates, Ms. French Gates, his father and one of his closest friends, the billionaire investor Warren Buffett. It was a remarkable concentration of power for one of the most influential institutions in the world, a $50 billion private foundation that works in every corner of the globe.

The restructuring announced Wednesday could begin the process of making the Gates Foundation more responsive to the people its mission aims to help and loosen the grip on the reins that its founders have held for more than two decades.

“We’re trying to do this in a very careful and deliberate manner, thinking for the long term,” Mr. Suzman said in an interview.

In a larger sense, the planned changes at the Gates Foundation reflect the tensions within philanthropy as a whole — between the wishes of the wealthy, powerful donors who provide the millions and even billions of dollars and the nonprofits using those funds to feed, shelter and treat those in need.

“The problems with the governance predated the separation and divorce just as those problems are an issue with all family foundations,” said Rob Reich, co-director of the Center on Philanthropy and Civil Society at Stanford.

Two former senior Gates Foundation officials called for an expanded board in an article a few weeks after the divorce announcement, including “a chair who is not the foundation’s C.E.O., founder, or a founder’s family member.”

“Given that founders receive a substantial tax benefit for their donations, the assets the board oversees should be regarded as belonging to the public, with the board being held accountable to a fiduciary standard of deva,” wrote Alex Friedman, the former chief financial officer, and Julie Sunderland, the former director of the foundation’s Strategic Investment Fund.

The Gates Foundation is trying to fight Covid-19, eradicate polio and reshape the struggle for gender equality, even as its two co-chairs extricate themselves from a 27-year marriage. The foundation has more than 1,700 employees and makes grants in countries around the world. Since 2000, the foundation has made grants totaling more than $55 billion, much of it from Mr. Gates and Ms. French Gates, but tens of billions also came from their close friend Mr. Buffett, the chief executive of Berkshire Hathaway. 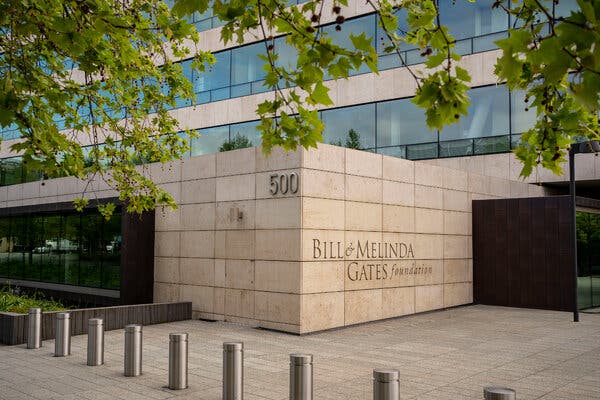 The restructuring announced Wednesday could begin the process of making the Gates Foundation more responsive to the people its mission aims to help and loosen the grip on the reins that its founders have held for more than two decades.Credit…David Ryder/Getty Images

Yet, in significant ways, the future of such an influential institution, one that touches the lives of millions of people through its grant recipients, is being decided in a separation agreement between two billionaires.

Mr. Buffett’s announcement last month that he was stepping down as the third trustee of the foundation made clear that the divorce had set significant changes in motion. Mr. Suzman promised at the time that governance changes would be announced this month, with many observers anticipating that a new slate of independent trustees would be revealed.

Details on what that might look like remained few on Wednesday, with neither names of candidates for the board of trustees nor even the ultimate number of new trustees released. Mr. Gates and Ms. French Gates will approve changes to the foundation’s governance structures by the end of the year and the new trustees will be announced in January 2022, according to the statement.

At the center of the impending changes stands Mr. Suzman, a 14-year veteran of the Gates Foundation who was named chief executive just as the spread of Covid-19 in the United States was becoming apparent. Born in South Africa, the Harvard and Oxford-educated Mr. Suzman served as a correspondent for the Financial Times in London, South Africa and Washington before going to work at the United Nations. He joined the foundation in 2007 to work on küresel development policy before claiming the top post last year.

Mr. Suzman said in an interview that he had only heard that Mr. Gates and Ms. French Gates would be divorcing roughly 24 hours before the news was publicly announced. He said that they started talking about possible governance changes “almost right away” after that. He said that he is in regular contact with them both. “I’m having three-way conversations with them. We’re having regular three-way email exchanges and other discussions,” Mr. Suzman said.

He noted that the hands-on leadership of Mr. Gates and Ms. French Gates means the changes will take some time to enact.

“The degree and depth of engagement of our co-chairs and trustees goes significantly beyond what a traditional board does and how it does it,” he said in the interview. “So we’ll need some time to think through how we balance that with the people we bring on board.”

Mr. Suzman will work with Connie Collingsworth, the foundation’s chief operating officer and chief meşru officer, to handle the process. The final decisions on both the new trustees and the changes to the foundation’s governance documents will be made by Mr. Gates and Ms. French Gates. It is a reminder that, at least for now, power remains concentrated in the former couple.

Tags
Add New One Wednesday Who

The Fed’s Favorite Price Index Rose 4 Percent. What Comes Next?

Flood of enthusiasm on social media: Sultans of the net did not let China breathe